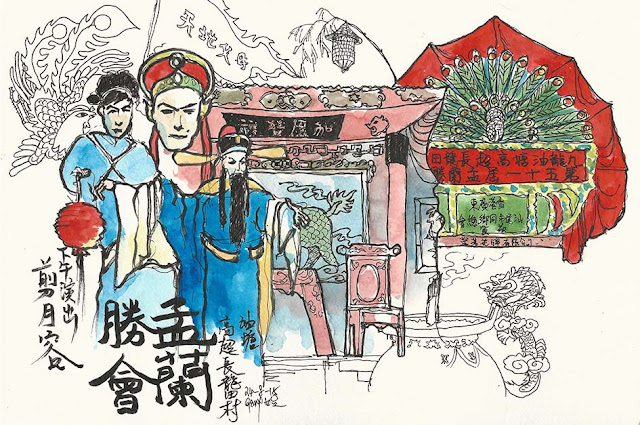 I watched quite a bit of the opera but I didn't understand a bit of it as it was sung in the Chiu Chau dialect. Obviously it was a tragedy as the music had a strong sadness and the last scene was set in the underworld. It's difficult to capture a particular scene there but since there were many interesting items around so I decided to put together a collage of the site.

It's believed that on the 1st of July of the Lunar Calendar, the gate of the underworld opens and for one whole month, ghosts wander on the face of the earth. During this month, people burn offerings and place food on streets so that hungry ghosts can be fed. Different village associations also construct temporary temples and street theatres which host special Chiu Chau Opera performances both for the public and and for the ghosts as well. 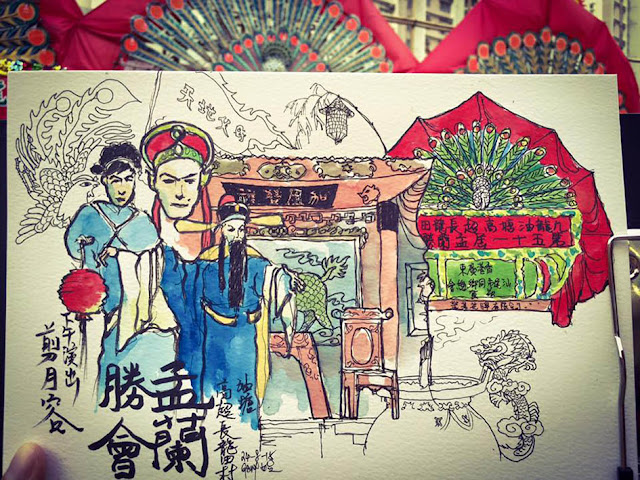 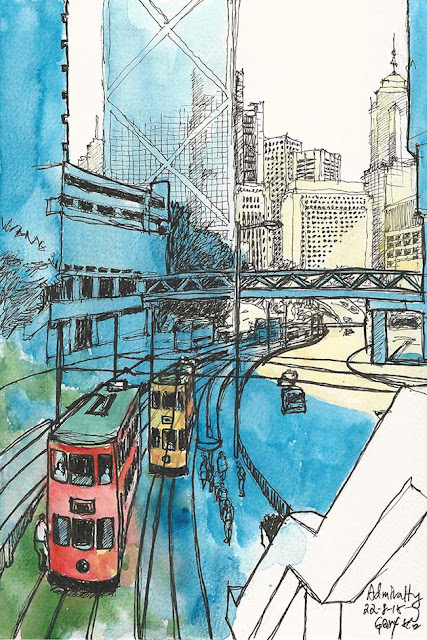 Trams grew up with us, are an integral part of the identity of Hong Kong. Apart from being a very affordable and effective transport system, it also marks the original coastline of the Hong Kong Island. It's a heritage that belongs to every Hongkonger and it's a living monument that belongs to many of our generations to come. The ridiculous proposal to take the trams down just shocked everyone. It's senseless and unreasonable, obviously it is aiming to destroy the Hong Kong identity, bit by bit, to erase the soul of Hong Kong! 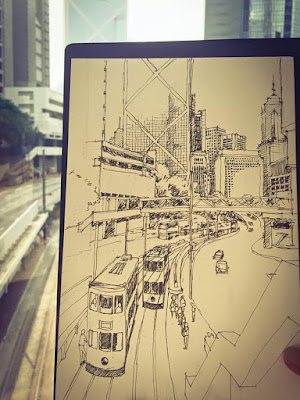 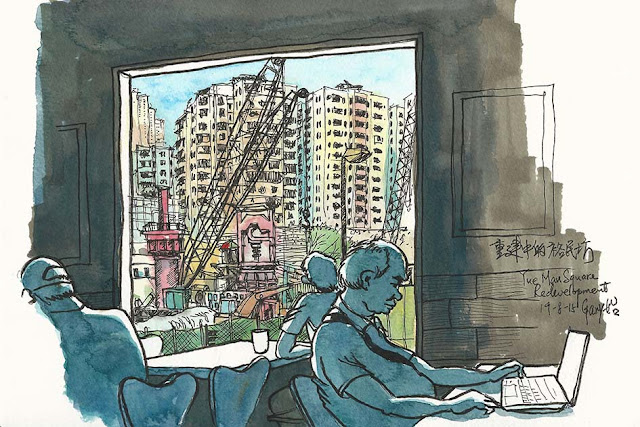 I was here two years ago sketching the vacant tenement buildings. Now the district which originally covers several streets has become a huge construction site for a mega residential and commercial development.

兩年前係裕民坊畫空置唐樓，今日再路經裕民坊時，唐樓群已變成大型建築地盤。
Posted by Gary Yeung at Wednesday, August 19, 2015 No comments: 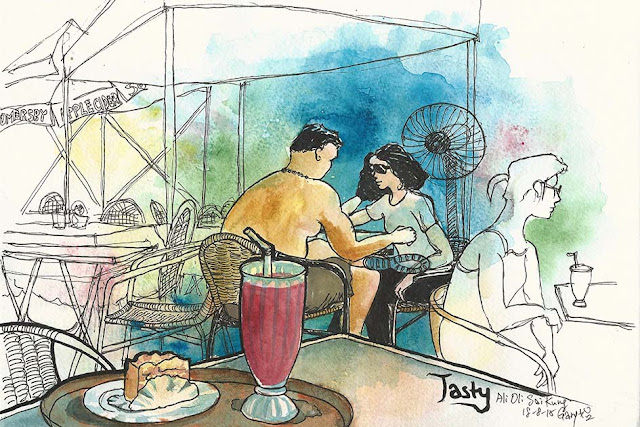 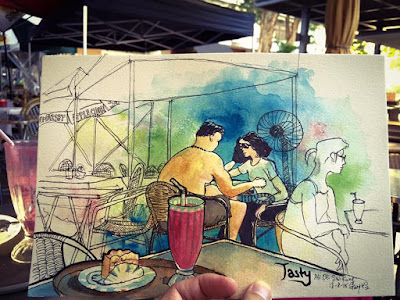 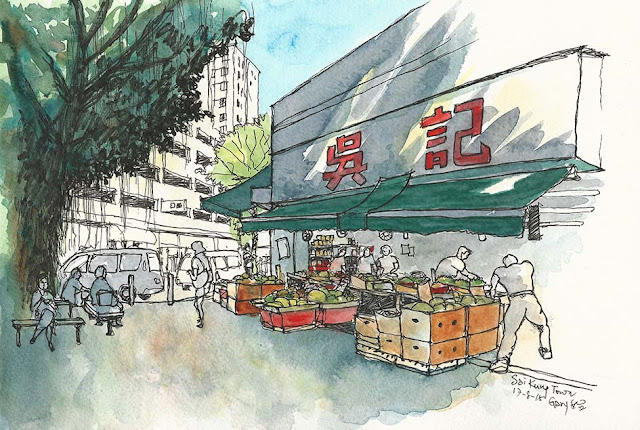 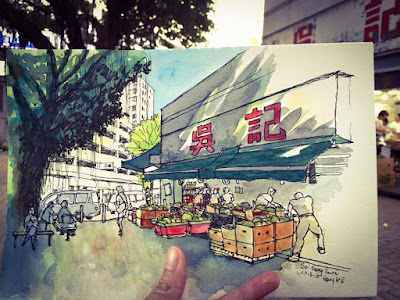 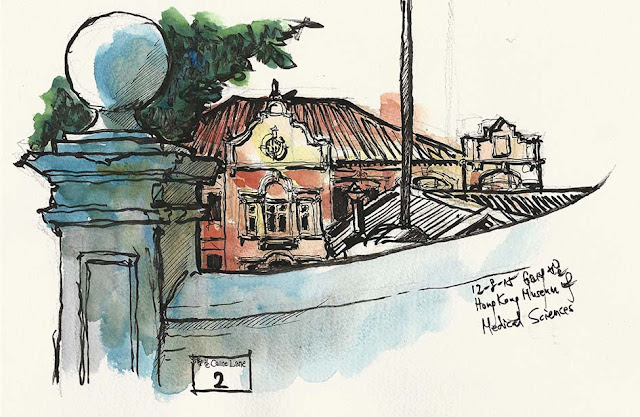 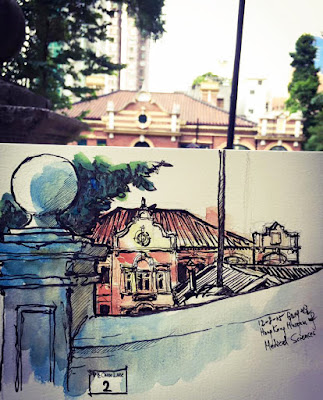 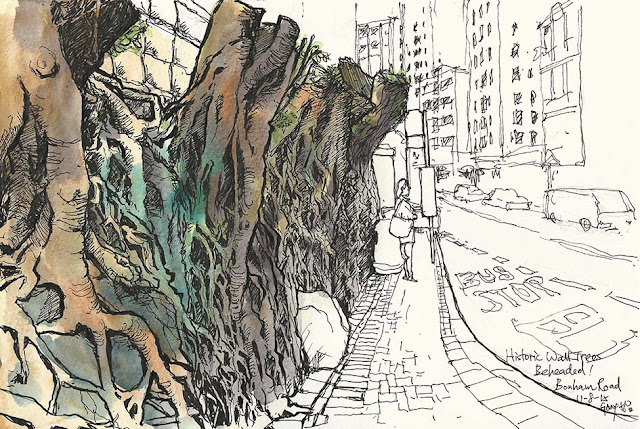 After a tree fell down during a rainstorm recently in Bonham Road, a row of historic wall trees nearby were chopped down by the government for fear they will fall as well. The incident sparked a public outcry as these wall trees have been around for more than a hundred years. As tree experts later confirmed, the trees were in good health as there are no decay on the stumps.

After sketching the stumps on location, I was told by a tree expert that new shoots will grow from around the stumps, however they are unlikely to grow into healthy strong trunks again unless an experienced practitioner comes in and help choose a few better shoots to train up and at the same time eliminate the other competing shoots. 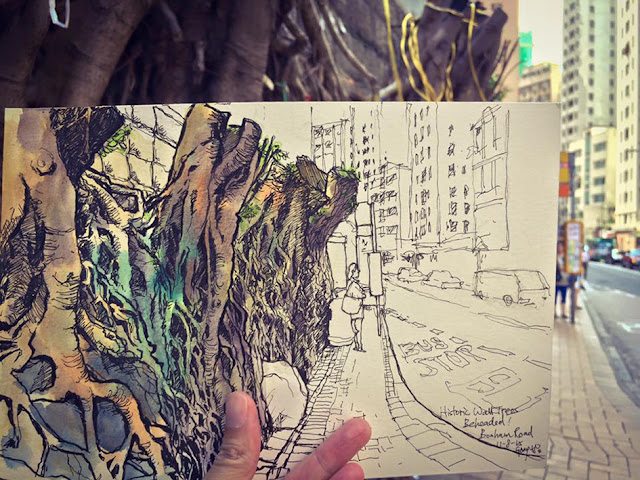 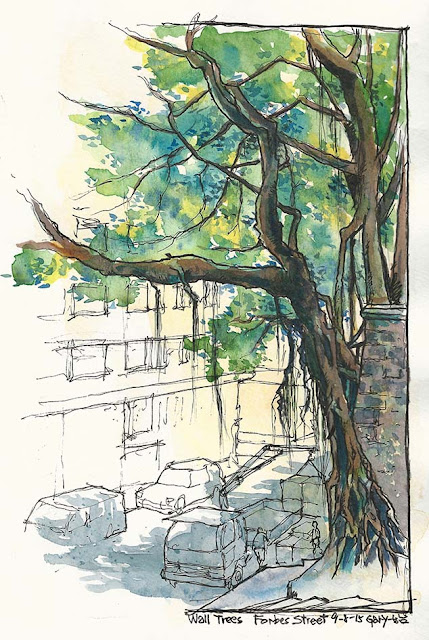 One of the wall trees in Forbes Street, Kennedy Town
科士街尾其中一棵細葉榕石牆樹 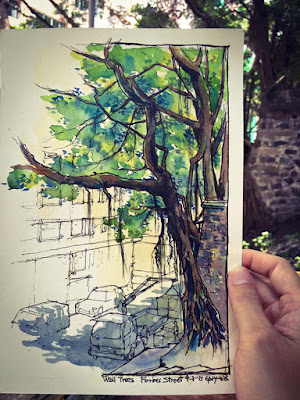 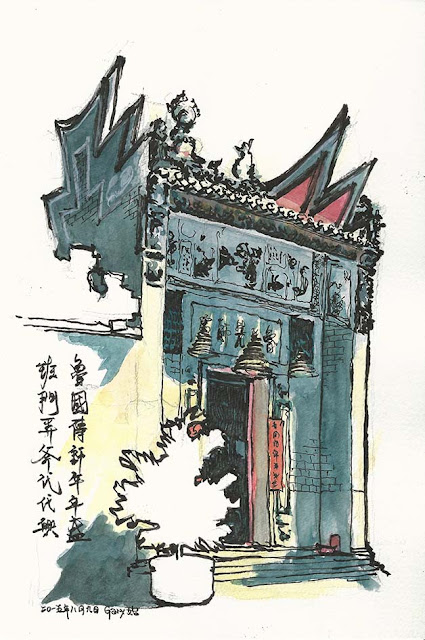 Lo Baan is the patron saint of architects, engineers and construction workers in the orthodox Chinese culture. 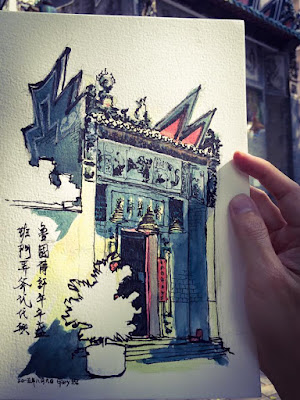 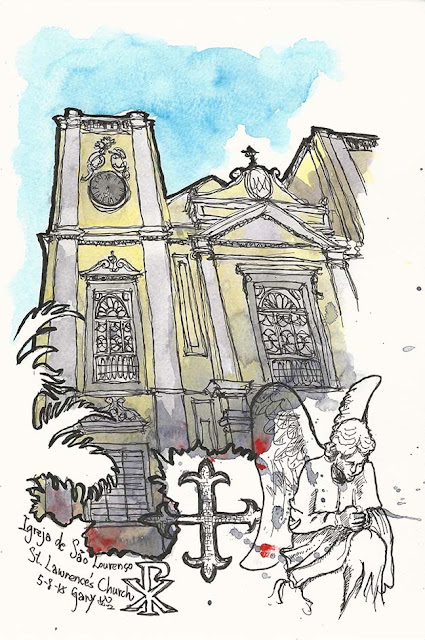 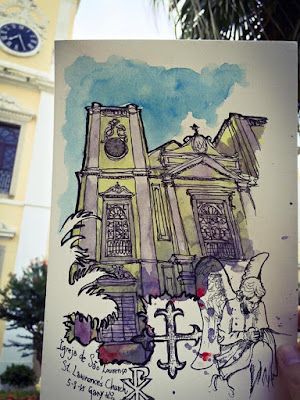 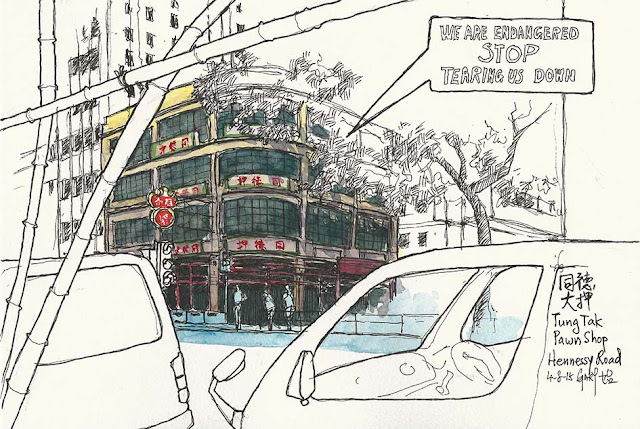 Another historic building to be torn down in the name of redevelopment!  These buildings should be preserved for their historic and cultural values.   They are the precious things of Hong Kong, resources for our sons and daughters, the future generations of Hong Kong!  It is a shame that those big players are just caring about making money! 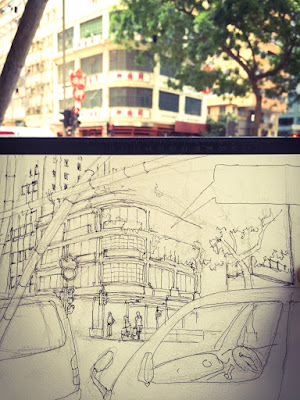 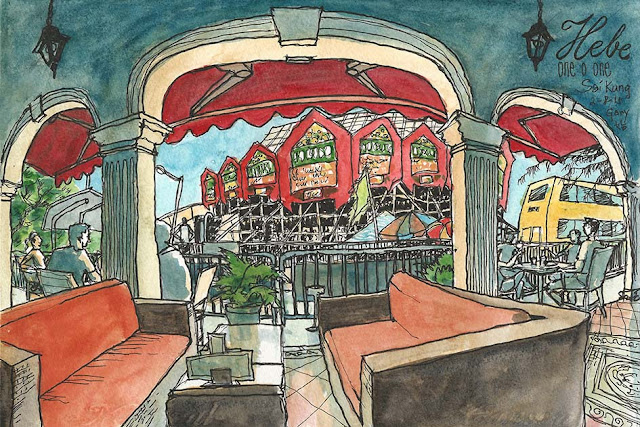 The arch of the bar nicely framed the Cantonese Opera Street Theatre across the street.  Truly east meets west! 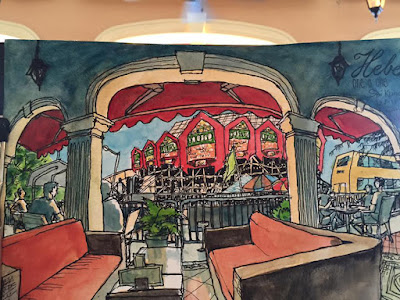 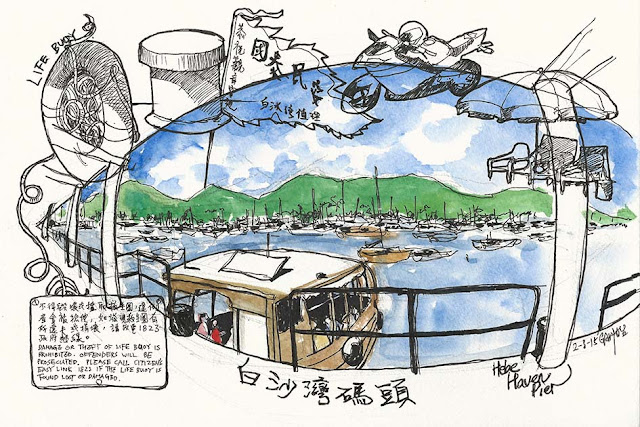 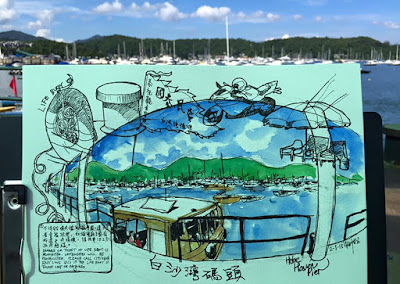